I think the first four mountains I have officially done have all been done because something about them is known to me.  With the last two, it was because I wanted to do Indian Head in the Adirondacks and settled for the one close to home in the Catskills.  For this weeks iteration, it was Peekamoose Blue Hole, a wonderful swimming hole high up Rondout Creek.  I visited the Blue Hole years ago for the first time on one hot hot hot day.  I think the temperature was mid 90’s when I left home, and upon arriving at the hole an hour later, it was low 70’s, and the water I think was somewhere in the 50’s (I doubt it’s ever higher than that).  It’s like a refreshing dip into a water basin in the freezer.  See the video below.  I hate to start with a PSA, but, what I found at this little piece of heaven was a mess, discarded food containers and beer bottles.  Please take care of the places you visit, if it fit in your car to bring it, it will fit after as well. 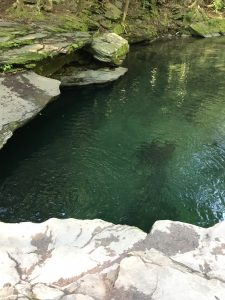 Now on to the Mountains.  I got here early and I was literally the only car in the parking lot.  So it was a solitary climb, I started off on the Peekamoose-Table Trail on the Peekamoose side because I wanted to take a dip in that hole at the end of the hike.  This was the wrong plan, but you live and you learn.  I will say more about that later.  The hike started off with no reprieve whatsoever, no easy stroll to start, it just said let’s climb bitches and if you can’t handle this start, then what the hell are you doing here.  Turn around chump, turn around now, you still have time.  Yet, I didn’t listen to the mountain and chugged on.  Like a chump or a champ, I don’t know…

The terrain in this hike was interesting, there were a couple of these maze type events where you are trying to figure out how to traverse the mazes that these rocks seem to form:

Now., when I hike alone I hike with headphones, one on one off if I am listening to a book, and dangling at times if I am listening to music.  I usually don’t pay attention to anything but my surroundings.  I look at the floor and pound away, not a care in the world, occasionally looking up for my markers to tell me I am in the right direction, or look at the offline trail map on my phone to see my elevation or see where I am in correlation with where I want to be.   Walk, Climb, and continuously pound my feet into the ground, every step closer to whatever summit I’m headed for.  Chipping away at elevation as I go along.  That being said, at the start of this hike I was about 1/3 into Stephen King’s IT… Not the right book to be listening to as I climb in the wee hours of the morning all alone.  The day before I also led a group hike for my CrossFit (The North) gym where I detailed my encounters with Black Bears and Snakes on the trails.  I was asked how I managed and the truth was, I don’t think about it.  If it happens, I react when it happens.  Sometimes like a scared little pansy others in a calm and collected manner.  Today I was aware of everything.  Not sure if it was because of IT, or if it was because of the conversation the day before, but I was reacting to every noise and movement in the trees.

At one point, I hear a quick fluttering.  Then I hear it again but closer.  I stop, and I am not ashamed that I was asking myself, what the fuck am I doing here all alone.  I hear the fluttering a third time and see something running STRAIGHT for me, fast too, like WTF am I looking at here?   I see it’s a squirrel and it’s coming right at me.  My only reaction was to jump straight back and clap really really hard.  I mean hard enough that my hands hurt.  My mind must have thought it was a bear, but no cause with a bear you make loud noises and step back in a calm manner.  I literally jumped off my skin and the fucking squirrel just ran in between my legs.  At this point.  All I could do was laugh at myself, at the situation and at the fear.  I actually stopped paying attention at that point and started enjoying my hike a bit more.  I was reaching 3400 feet of elevation at this point and I was really starting to wonder where my money shots were.  The two on the map thus far had been lackluster and nothing to write home about.

This trail has also been poorly marked.  When I got to 3800′, just reaching Peekamoose I realized that I never saw the infamous over 3500′ sign I have seen my last couple of hikes of this magnitude.  As I reached the summit of Peekamoose Mountain I realize that the only way I can really tell is that it has flattened out a bit and my GPS says I’m here.  It took me a bit to find the tiny spur trail that got me to the view point for Peekamoose.

What a view!!! Even though it’s a bit choppy, I think I was trying to catch the experience of me coming out into the spur trail and being blindsided by this amazing view.  Here are a couple of pics:

Now., to quickly descent only to climb again up to Table and just now I saw the first sign of civilization.  My first other hikers a nice couple just out on a stroll.  They seem to have come up probably at the same time as me but from the other direction.  The terrain stays the same.  Heavily wooded with not much to see but the trees and the sliver of a trail.  Sometimes lost in other small spurs but trust me, if you go too long without seeing that wonderful blue marker, stop and orient yourself.

As I got to Table all I can say is meh… Don’t get me wrong, I just mean that as I stand on the summit I see nothing else but the same.  Just a little flatter, and after experiencing that with Peekamoose I was hoping for a bit more.  It just means that this hike was more about the trek up here.  Which was as always both fun and arduous at the same time.   After a little decline, I found a small spur trail off to the left where I got the following view.  It says a lot, when these views are not top notch.  I want to be wao’d  and while this was wao, I guess I’m starting to expect bigger wao’s!

After Table, I ran into two more hikers and asked about three more interesting things I saw on the map that would add about 1.5 more miles to my hike, along with a decent amount of descent I would have to re-climb.  They told me the lean-to was cool and the spring was just a spring, those two would add another .60 or so.  I did not know what a lean-to was, I figured a point where you could lean from a tree or rock or something.  No though, it was just a hut, similar to the ones you see along the Appalachian at certain points.  A spring which was just that a tiny spring of water coming out of the mountain, had I needed water I would have tried it.  I thought it would look creek like, but it did not, it was just a pipe in the side of the mountain allowing the fresh water to spout out.

As you can see not much to write home about!  I did get to see the infamous 3500′ sign, meaning I descended over 300′ for these shots.  Ouch!

Well, now the easiest, hardest part… Coming down the mountain.  In this case down and up a few times since I have to ascend back up to Table.  Descend Table then Ascend Peekamoose again… Ufff…

Anyways, I stopped for lunch on the Peekamoose View Point and now for real, headed down!  It’s easy because it’s no longer strenuous and it becomes more of an art form than anything else.  You are coming down fast, yet your legs are jello and your knees are feeling the brunt of every piece of descent as you take it, which makes it hard as fuck.

As I go down, now I start seeing people.  They all ask me the same thing how much longer to the summit, I ask which one.  I explain there are two and let them know I am not really sure.  I recite how long I have been out here and they can try to figure out the rest on their own, my brain is not working to compute time and distance right now.  I keep trekking down, looking forward to the dip in the blue hole that will take me out of commission for the next week with a terrible cold.

When I arrive at the parking lot it is a different sight I see.  It is no longer pristine! The parking lot is packed to the gills, there are park rangers guiding traffic letting people know they cannot park on the side of the road and guiding them to other lots from 1/4 mile to a 1/2 mile in either direction.   You hear the loudness of a Peekamoose Blue Hole filled with people.  I take off my boots and everything else I don’t need and head down to the hole and quickly jump in.  My body is telling me no, it’s actually yelling it at me.  Yet I think, how can I be here and NOT take a dip, it would be sacrilegious.   So I jump in once and the cold hits my body with the weight of a few tons.  I mean it was a SHOCK and a half.  Yet, I want a video and give my iPhone to one of the watchers, cause few are really swimming.  It’s hard to jump into 50 degree water! They shoot this video!

I get out, grab my towel  and shirt… Leave my Beats wireless headphones for some lucky person to find and give the people around me a PSA.  I talk about the state of the hole and how I hope they are not part of the problem and please tell other people to pick up their crap.

As I hit the winding road back home,  I reflect on the mistake of jumping into that water after having burned close to 3000 calories over almost 6 hours of hiking these two summits… Oh well, it’s all part of the experience I would pay for over the next week.

Next up, Wittenberg Mountain and maybe Cornell…

This hike was actually done on July 9th, but the last two weeks have been the end of my Master’s program so I have been concentrating on rewrites of my thesis, I will try to log my thoughts and rants of the next hikes rather quickly instead of this 2 week delay.  I knew it would be a delay so I recorded myself throughout the hike with my thoughts, the recordings were hilarious, specially the one about the squirrel.  FUCK IT., don’t laugh too hard, here’s my squirrel incident recording right after it happened:

‘Till Wittenberg!  Scheduled for July 30th.

This site uses Akismet to reduce spam. Learn how your comment data is processed.